There’s a book in all this.

About a hundred miles west of Austin along Texas State Highway 71, the road widens for a moment. The speed limit dips to fifty five and, if you’re not paying attention, you might miss the town of Pontotoc altogether. Keep an eye out, though, and you’ll see a vineyard on your right: a few acres of Tempranillo with a beautiful old windmill and stone well. Next to the vineyard, there’s the old, derelict town centre dating from the turn of the century, when this community was first established: a cinema, grocery store and post office, all made of locally quarried stone. Adjacent to these, and looking out over the vines, is a magnificent residence in which I find myself right now. Dating from the same era as the town centre buildings, it is designed in a style that, I imagine, felt good to the Germans who originally settled this place and who remain a big influence throughout Texas Hill Country. These beautiful structures are in various states of repair and their owner, Carl Money, is slowly restoring them to their former glory.

Carl is also responsible for planting the vineyard, which in land area comprises a large part of Pontotoc. A prominent lawyer and longtime globetrotter, Carl fell in love with wine as a young man in Europe. He is the archetypal Texan: friendly, talkative, assertive; a man with a big accent, big plans and, it seems, the drive to realise them. Having tasted wine all over the Old World, he clearly has an international perspective, which makes his decision to make authentically Texan wine all the more interesting. He might have chosen any number of places to plant his beloved Tempranillo vines, but he chose Pontotoc, Mason County. He isn’t just establishing his own Estate; in effect, he is building an entire wine community in Pontotoc. When complete, the old town centre will house three wineries, a large tasting hall and various entertainment spaces. His belief in the State’s wines is demonstrably strong, as is his conviction that a geological feature known as the Llano Uplift, which underpins Pontotoc Vineyard and runs through much of Mason County, provides a unique terroir for the region. Having spent some time with him over the past few days, Carl’s enthusiasm is infectious. While in Texas, I hope to get a sense of why this region’s wines have inspired such commitment.

The old stone town centre already houses Pontotoc Vineyard’s winery and it is here that Don Pullum, Pontotoc’s winemaker, works with the vineyard’s Tempranillo and premium parcels purchased from other Texas vineyards. “All Texas fruit” is the philosophy, a somewhat radical, purist approach in a state that has habitually purchased grapes and wine from California to blend with the local product. Don Pullum makes wine at a couple of other wineries too; in fact, he was the first commercial winemaker in Mason County, where Pontotoc is located. He also planted the County’s first commercial vineyard, Akashic Vineyard. It’s fair to say he’s the father of the wine industry in Mason County, and growing the County’s wine industry remains his focus. 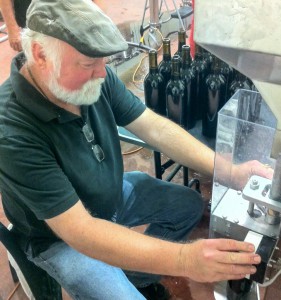 It wasn’t an easy birth. In fact, the first winery in the County, Sandstone Cellars, had to wait for an amendment to the Texas Constitution before it could sell its wines at cellar door. Mason, you see, is a dry county, and the sale of alcohol is only permitted in specific circumstances. From Sandstone’s establishment in 2003 has sprung a whole industry in Mason County, albeit one that is tangibly emerging from the vacuum of prohibition. There are now about ten vineyards here, most of which were established with Don’s encouragement, and everywhere I go there seems talk of new plantings, both underway and contemplated. A handful of new wineries has also appeared. The wines are still few in number and astoundingly varied in varietal composition, but not style. In fact, stylistic consistency is striking across producers, a fact that becomes much more interesting when one considers how few harvests have taken place, how many different varieties are being used and the relative lack of any winemaking tradition here.

If you follow the wines of Sandstone Cellars, you can piece together the story of Mason County wine. The cornucopia of varieties that have been used to make these wines prompted Sandstone’s owners, Scott Haupert and Manny Silerio, to name their wines sequentially, as if to reinforce the fact they are embarking on a kind of vinous expedition. Starting with with the I in 2004, an almost-standard Rhône blend (Grenache, Syrah, Mourvèdre, with a cheeky dash of Primitivo), Sandstone’s wines have included varieties as diverse as Touriga Nacional, Viognier, Sangiovese, Tempranillo, Nebbiolo, Zinfandel, Merlot and Barbera. Often mixed in complex “fusion blends,” these varieties provide different expressions of local growing conditions, often with quite different flavour profiles, but which are unified by unwaveringly bright fruit, strikingly floral aroma profiles and, in the mouth, medium bodied elegance.

As good as these and the wines of Pontotoc Vineyard are (and they are very good), producers here are still working with open minds toward a set of varieties that best express the local terroir. Tempranillo features strongly, as does Touriga Nacional, Mourvèdre and Syrah. Whites are more problematic, although Viognier has its proponents. But my sense is the experimentation will continue as growers get to know their sites better and winemakers discover how to harness the region’s fruit most effectively. Without a long history of winemaking, there’s a shared sense of discovery amongst producers here; this is truly frontier country when it comes to wine, and those working to establish the region show a curiosity and energy I’ve not encountered in more established regions.

As for me, I’m working with Don for a month or so, following him as he consults to the region’s wineries and vineyards and learning about how it’s done here. My goals are to taste and learn about Texas wines of the region, and I couldn’t be better positioned to do so. Stay tuned…